Alerts
COVID-19 update
See our updated visitor policy, which allows 1 visitor per patient during exams only and includes masking for all. No visitors are allowed in treatment (applies at all locations). Only exceptions are patients with physical or mental disability.
More info
Skip Navigation 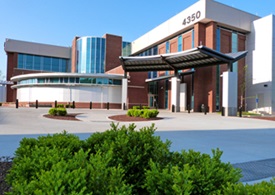 In barely six months – Sept. 26 to be exact – The University of Kansas Cancer Center will apply for the National Cancer Institute’s highest level of designation: comprehensive status.

Of the nation’s more than 5,000 cancer centers, just 69 are NCI-designated. Of those, only 45 have achieved comprehensive designation.

The cancer center reached the first level of NCI designation in June 2012. Pursuing the higher level now is akin to, well – consider it in sports terms.

“Becoming an NCI-designated Cancer Center was analogous to reaching the big leagues,” said Danny Welch, PhD, the cancer center’s director of Basic Science, “but becoming a Comprehensive Cancer Center is like going to the All Stars.”

Since reaching the first level of NCI designation, cancer center staff point out, their efforts have become “wider, deeper and larger.”

In particular, they have:


After its application in September, the cancer center will face a rigorous evaluation process by a site visit team sent by the NCI Office of Cancer Centers. Findings are expected to be announced by June 2017.

“We have already made significant advances since we earned NCI designation in 2012,” added Roy Jensen, MD, cancer center director, “but we have a lot to do by late September to reach the next level.”