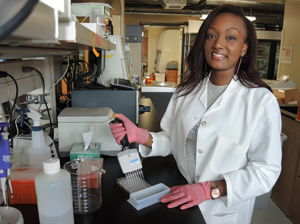 Ovarian cancer is the 8th most common cancer among women, but it causes more deaths than any other cancer of the female reproductive system. Part of what makes ovarian cancer so deadly is that it is very difficult to detect in its early stages. Symptoms, which include bloating, abdominal pain and frequent urination, are often dismissed or misdiagnosed.

Rebecca Wates, PhD, is all too familiar with how these symptoms can go unchecked for too long. Dr. Wates is a postdoctoral researcher at the University of Kansas Medical Center with the lab of Andrew Godwin, PhD, in the Department of Pathology and Laboratory Medicine. When she was 16, her aunt, a nurse, died from ovarian cancer. Wates says that doctors initially dismissed her aunt’s symptoms. After researching her own symptoms, her aunt approached her doctor and suggested that she may have ovarian cancer.

“When my aunt was diagnosed with ovarian cancer, it was too late for her. My mom battled breast cancer, but was diagnosed earlier, and is now a 25-year survivor. Comparing the two pushes me to work harder to give women better treatment options,” said Wates.

Chemotherapy works by stopping or slowing the growth of cancer cells. However, each patient can have a variety of types of ovarian cancer cells, making it difficult to find a chemotherapy that effectively targets them all. That’s why Wates is approaching treatment from a different angle. She is looking to target and destroy what the tumors need to survive.

Wates’ previous research identified a protein that acts like a motor to help cancer cells divide. Drugs are available to target this motor, but they don't work on ovarian cancer cells. That’s because a secondary motor, a protein called KIF15, revs up and helps the ovarian cancer cells keep growing. Wates is searching for a compound that targets and blocks the KIF15 protein. In the lab, Wates uses a computer-controlled robotic system that can test as many as 1,500 compounds in about 10 minutes.

“This research could improve treatment options for women suffering from ovarian cancer,” said Wates. “With my research, I hope to bring a new treatment strategy to the market that works across many types of ovarian cancer and that may spare women the challenge of toxic chemotherapies.”