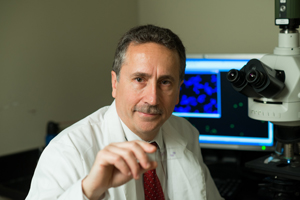 The American Cancer Society estimates that about 22,280 women will be diagnosed with ovarian cancer this year, and 14,240 women will die from the disease.  Despite being rare, it is the deadliest of all female reproductive cancers.

Breast, uterine and cervical cancers all have screening tests and can be detected early. However, only one out of four ovarian cancer cases is diagnosed before it is advanced. In fact, ovarian cancer is referred to as the “disease that whispers” because symptoms can be ambiguous, often misdiagnosed, and even go completely unnoticed.

According to the American Cancer Society, the four major symptoms of ovarian cancer are:


While other issues may cause these symptoms, if they persist, it is a good indicator to see a doctor.

If ovarian cancer is found and treated before the cancer has spread outside the ovary (stages IA and IB), the 5-year relative survival rate is 92 percent. Yet only 15 percent of all ovarian cancers are found at this early stage.

Researchers at The University of Kansas Cancer Center are developing cutting-edge lab-on-a-chip tests that may one day detect ovarian cancer much earlier – with just drops of a patient’s blood. The tiny testing device captures and analyzes biomarkers, which are actively released by tumor cells. These biomarkers, referred to as exosomes, accumulate in the blood and other bodily fluids. Exosomes are small – no more than about one-thousandth of a human hair's width. But scientists like Deputy Director Andrew Godwin, PhD, believe they may have big potential when it comes to cancer diagnostics.

“Cells have their own miniaturized postal service in the form of these microvesicles. Exosomes released from cancer cells carry molecular cargo that can be received by surrounding cells and promote signals to help the tumor grow and spread,” said Dr. Godwin. “We have also found that these microvesicles are chock-full of informative biomarkers, including RNAs and biologically active proteins, which can be used to detect the presence of cancer early and track the disease state during treatment.”

Dr. Godwin and Yong Zeng, PhD, assistant professor of chemistry at KU, are actively collaborating to create these biomedical testing devices and cancer specific assays. They say the “lab on a chip” could lead to earlier detection and improve ovarian cancer patients’ overall survival rates.

The microchip-sized testing device screens particles that are released from cancer cells. The screens can be used in cancer detection instead of more invasive and costly biopsy procedures. Small but mighty, the “lab on a chip” has the potential to transform the early diagnosis of ovarian and other cancers.

Now, Yong and Godwin are looking at second-generation microfluidic devices that will be more robust and versatile. Yong’s group is also redesigning the “lab on a chip” to measure RNAs in circulating exosomes, expanding the types and number of biomarkers that can be measured. To support the technology developments, Godwin and his colleagues continue to characterize exosomes from a variety of patient samples to identify unique biomarker signatures that can distinguish different types of cancer and serve as the fuel to develop clinical tests.

“Currently, there are no reliable tests that detect ovarian cancer at this early of a stage,” said Dr. Godwin. “Through efforts of many, we continue to explore and push science and technology to develop tools that will one day improve cancer diagnoses. It’s particularly significant for ovarian cancer patients, since early detection can save lives.”