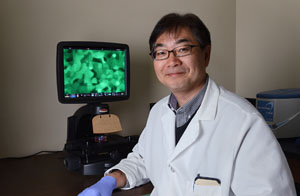 Researchers at The University of Kansas Cancer Center have found that high doses of drugs commonly used to fight high cholesterol can destroy a rogue protein produced by a damaged gene that is associated with nearly half of all human cancers.

Tomoo Iwakuma, M.D., Ph.D., an associate professor in the Department of Cancer Biology, and his team have published the first research showing how the use of statins, such as Lipitor (atorvastatin), Crestor (rosuvastatin) and Mevacor (lovastatin), can shut down structurally mutated p53 proteins that can accelerate cancer progression, while not harming proteins produced by healthy p53 genes. Although statins are not a cancer treatment per se, the understanding of how they affect mutated forms of p53 could lead to new medications designed specifically to knock out the damaged p53.

"I could have kept working for 20 years or longer without any big finding," said Iwakuma, whose work appeared in the November 2016 issue of Nature Cell Biology and has been recommended for F1000Prime, a prestigious peer-review service that identifies research that is likely to influence biomedical and clinical knowledge. "This is the most exciting work of my science life, because it will contribute to treating cancer."

Cancer is essentially caused by mutations to the genes that regulate cell growth or cell death. Of the hundreds of genetic culprits that have been implicated with causing various cancers, p53, dubbed the "guardian of the genome," is the mightiest of them all. Mutant forms of p53 have been found in nearly half of all malignant tumors and nearly every type of human cancer.

When p53 works properly, it produces proteins that keep cells from growing and dividing too quickly. When p53 becomes mutated, either spontaneously or through heredity, its regulating abilities no longer work and cells can grow out of control, forming tumors and invading normal tissues - that's cancer.

Compounding the problem that mutant p53 can no longer suppress the growth of tumors is that fact that it can also actually accelerate the progression of cancer and drug resistance.

The challenge for Iwakuma and his team was to find out how to eliminate the misbehaving protein, while leaving cells containing healthy p53 needed for normal cell growth unharmed.

Hunting for a weapon

Four years ago, Iwakuma and his lab team collaborated with the High Throughput Screening Laboratory (HTC) on the University of Kansas Lawrence campus to screen compounds to find out which ones might degrade mutant p53. Of the nearly 9,000 compounds they tested, about 2,400 were Food and Drug Administration (FDA)-approved drugs, while the others were non-FDA approved and uncharacterized compounds.

"Mutant p53 makes human cancer cells more metastatic and resistant to chemotherapy," he said. "That's a primary reason to get rid of it -- to improve survival in cancer patients."

When Iwakuma got an email from the HTC listing the 10 compounds that the screenings had shown promise in reducing mutant p53 levels, he was shocked to see that some of them were statins.

"At first I thought, 'What? This must be wrong,'" said Iwakuma, who first became interested in p53 as a post-doctoral student at the University of Texas MD Anderson Cancer Center.

Early screenings often produce false positives, so Iwakuma had to verify the lab results, first testing them in cells and then in mice. The KU researchers injected the mice with cells expressing mutant p53, waited for tumors to form, and then treated them with high doses of statins for 21 days. They found that tumors did not grow well in mice treated with statins compared to the controls, and they learned the statins worked only on structurally mutated (misfolded) p53, as opposed to p53 mutated at the spot where it binds to DNA. This was an important discovery, particularly since clinical research with statins had not considered the type of p53 mutation.

"We found that only the structural mutation is affected," Iwakuma said. "Which explains why clinical studies with statins were inconclusive."

While the team was elated with its findings, the researchers knew their work was just beginning.

"Once we knew for sure statins degraded mutant p53, we still had to figure out how," explained Atul Ranjan, Ph.D., a post-doctoral researcher in cancer biology at KU and co-author on the study. "We needed to find out exactly how the statins work for p53 degradation; which other proteins are involved in the mechanism."

So Alejandro Parrales, Ph.D., another co-author on the study and a post-doc in Iwakuma's lab, began looking at heat shock proteins, which are known for their efforts to correct misfolded proteins, as a possible piece to the puzzle. The researchers identified DNAJA1 as a heat shock protein that binds to misfolded mutant p53 and thus protects the mutant p53 from an enzyme that flags damaged or misshapen proteins for destruction.

It turned out that the same mechanisms that help statins reduce cholesterol are at work preventing mutant p53 from binding to DNAJA1, leaving these mutant proteins unprotected. As a result, mutant p53 is free to attach to the enzyme that leads to its degradation. And since mutant p53 is not usually present in normal cells, all this happens without affecting healthy cells.

Going forward, researchers know that many challenges await them, including finding ways to target DNAJA1 directly, now that they know its absence results in mutant p53 being degraded. Iwakuma also sees potential to use statins or another p53-degrading drug in conjunction with chemotherapy.

Mutant p53 makes human cancer cells more metastatic and resistant to chemotherapy," he said. "That's a primary reason to get rid of it -- to improve survival in cancer patients."