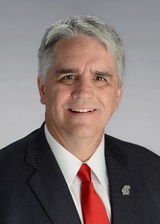 Roy A. Jensen, MD, is the new president of the Association of American Cancer Institutes. He began his two-year term today at the close of the AACI/CCAF annual meeting in Chicago.

In 2004, Dr. Jensen was appointed the director of The University of Kansas Cancer Center, the William R. Jewell, M.D. Distinguished Kansas Masonic Professor, the director of the Kansas Masonic Cancer Research Institute, professor of pathology and laboratory medicine, and professor of anatomy and cell biology at the University of Kansas Medical Center. Under his leadership, KU Cancer Center earned designation as a National Cancer Institute (NCI) cancer center in 2012.

At the annual meeting, co-hosted by the Cancer Center Administrators Forum, Dr. Jensen announced his plans to spearhead the development of a comprehensive, cancer-specific clearinghouse of model legislation for AACI cancer centers to share with their state legislators.

“Cancer centers are an enormous force for good and collectively have worked to lower cancer incidence and mortality rates for over four decades,” said Dr. Jensen. “Good public policy that limits carcinogen exposures or promotes the adoption of healthy behaviors can save hundreds—if not thousands—of lives and represents a critical tool in our efforts to lower cancer mortality.”

Robust data will be gathered through partnerships with other national cancer advocacy organizations to support policy statements on priority issues, which may include oral chemotherapy parity, radon legislation, coverage of routine care for clinical trials, and raising the minimum age for purchasing tobacco.

“AACI has an unprecedented opportunity to exert enormous influence on public policy,” said Dr. Jensen. “My hope is that by creating model legislation on a variety of key issues, we will be able to collectively push state policies forward to improve the prevention and treatment of cancer across the country.”

A member of AACI’s board of directors since October 2013, Dr. Jensen chaired the association’s 2013 Annual Meeting program committee.

With more than 150 scientific publications, Dr. Jensen has lectured widely on the clinical and molecular aspects of breast cancer pathology. His research focuses on understanding the function of BRCA1 and BRCA2 and their role in breast and ovarian neoplasia; and on the characterization of premalignant breast disease, both at the morphologic and molecular levels.

“With Dr. Jensen’s strong background in public policy, I’m confident he has what it takes to mobilize our members to speak out on issues that impact the cancer community,” said AACI Executive Director Barbara Duffy Stewart. “His presidential initiative—a ‘legislation library’—has real growth potential and we hope our members will find it useful for years to come.”

In addition to appointing Dr. Jensen, AACI members have elected Karen E. Knudsen, PhD, to a two-year term as vice president/president-elect of AACI’s board of directors. Dr. Knudsen is enterprise director of the Sidney Kimmel Cancer Center (SKCC) – Jefferson Health in Philadelphia.

The Association of American Cancer Institutes (AACI) comprises 98 premier academic and freestanding cancer research centers in the U.S. and Canada. AACI is dedicated to reducing the burden of cancer by enhancing the impact of the leading academic cancer centers.