Ewing Sarcoma Patient Longs To Be a Kid

It’s not unusual for an 11-year-old boy who plays right tackle and defensive end to feel a pain in his side. During the 2017 football season, Matthew Arndt told his mom about the problem. What was believed to be childhood growing pains soon turned into a diagnosis of Ewing sarcoma, a rare cancer that grows in the bones or soft tissue surrounding bones.

Matthew lives with his mom and dad, Melissa and Jason Carriker, and brothers, Michael and Dean, in Belle Plaine, Kansas, which is 20 miles south of Wichita. Matthew was first diagnosed by an oncologist in nearby Wichita. Then he was referred to The University of Kansas Cancer Center.

“Ewing sarcoma is usually discovered in children and adolescents between the ages of 4 and 15. It often appears in the long bones, but may occur in any bone of the body,” says Dr. Panicker. “Matthew’s disease began in his right ribs and spread to his left lung.”

In July 2018, Matthew was admitted to The University of Kansas Hospital, where cardiothoracic and pediatric surgeons removed 4 ribs and reconstructed Matthew’s chest wall using a mesh material.

During recovery and another round of chemotherapy, Matthew relied on the loving support of his close-knit family. He also enjoyed the constant companionship of his chocolate Labrador, Lady.

In October 2018, Melissa received a phone call from Matthew’s cancer care team. The surgery and chemotherapy had been successful. Matthew’s bloodwork and scans revealed no evidence of cancer in his body. The family was able to breathe a collective sigh of relief. In May 2019, they even traveled to Hawaii for a fabulous vacation provided by the Make-A-Wish® foundation.

But the joy did not last. Shortly after the trip, Matthew’s pain returned. New scans revealed the Ewing sarcoma was back.

“This time it was near his 10th rib. It was growing into his spinal column and pressing on his spinal cord,” says Melissa through tears.

According to Dr. Panicker, the location of the new tumor was worrisome. “We were concerned that he might begin to experience neurological symptoms, so we started radiation treatments right away,” she says.

Matthew had 31 rounds of radiation under the direction of radiation oncologist Xinglei Shen, MD. It was not at all how he hoped to spend his summer. To make the therapy more convenient, Matthew and his mom spent 6 weeks at the Ronald McDonald House near the hospital. 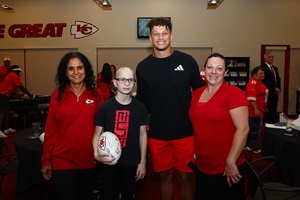 “The good news is that Matthew has shown great improvement. We are not as worried about his spine now,” says Dr. Panicker. “Radiation definitely reduced the size of the tumor.”


Matthew powered through more chemotherapy treatments in August, November and December. His efforts definitely paid off. Recent tests show no evidence of cancer in his body. Dr. Panicker and the pediatric cancer team remain cautiously optimistic.

“We see many young patients, like Matthew, from small towns in Kansas and Missouri,” says Dr. Panicker. “Our team treats all types of childhood cancers, including the rarest and most complex.”

Melissa has been impressed with the pediatric hematology and oncology team. “We absolutely love them,” she says. “They have not only built great trust and rapport with Matthew, but also with my husband and me. I highly recommend not only our team, but the entire cancer center.”

As a reward for his hard work, Matthew’s cancer care team nominated him to attend a 2019 Kansas City Chiefs game where he was honored as a Crucial Catch survivor. They also selected Matthew for a trip to Florida sponsored by the Sunshine Kids™ organization.

“Matthew is very brave and kind. He asks lots of good questions about his treatment. We love his upbeat outlook and sense of humor. He’s a great kid!” shares Anne Stanton, APRN, a member of the team.

Before cancer, Matthew loved playing football, doing tricks on his bike and fishing. Now he has to be extremely careful about getting hurt or catching an illness. “I play a lot of Xbox games like Rainbow Six Siege,” says Matthew.

Despite missing many days of school due to chemo treatments, Matthew continues to excel in his classes. “He goes to school when he feels good and has kept up his grades – all A's and B's,” says Melissa. “We’re super proud of him.”